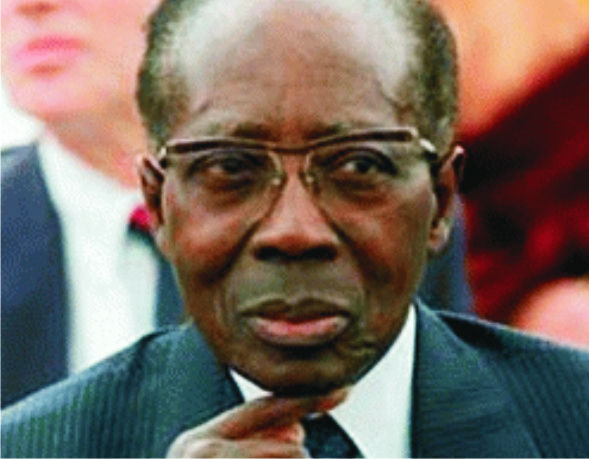 First president of Senegal, acclaimed poet, writer, teacher and statesman. Co-founder of African philosophical movement known as ‘Negritude’, the black consciousness movement of the French-speaking world. The negritude then posited that, while white people excelled at rational thought, blacks possessed superior intuitive powers. The idea of négritude informed not only Senghor’s cultural criticism and literary work, but also became a guiding principle for his political thought in his career as a statesman. Senghor worked assiduously ensuring the transition of his West African country from colony to respectful independence.

Léopold Sédar Senghor was born in Joal, Afrique Occidentale Française (French West Africa now Republic of Senegal), to a Serer (third largest ethnic group in Senegal) Father and Roman Catholic mother. He initially wanted to become a priest and attended a seminary, but at the age of 20 he decided that he would rather teach and relocated to a college in Dakar. In 1928 Senghor traveled to Paris to continue his studies on a partial scholarship.

Léopold Senghor became the first black African to become an agrégé, the top qualification for a teacher in the French education system, and became a professor of African languages and civilization at the École Nationale de la France d’Outre-Mer.

In 1939, Senghor was enrolled as a French army enlisted man (2ème Classe) with the rank of private within the 59th Colonial Infantry division in spite of his higher education and his later acquisition of the French Citizenship in 1932. A year later in 1940, during the German invasion of France, he was taken prisoner by the Germans in la Charité-sur-Loire. He was interned in different camps, and finally at Front Stalag 230, in Poitiers. Front Stalag 230 was reserved for colonial troops captured during the war. German soldiers wanted to execute him and the others the same day they were captured, but they escaped this fate by yelling Vive la France, vive l’Afrique noire! (“Long live France, long live Black Africa!”) A French officer told the soldiers that executing the African prisoners would dishonour the Aryan race and the German Army. In total, Senghor spent two years in different prison camps, where he spent most of his time writing poems. In 1942 he was released for medical reasons. After his release he joined the Resistance movement in France.

After World War II Senghor pursued a career in politics, entering the French National Assembly as one of Senegal’s two deputies in 1946. In 1948 he founded the Union Progressiste Sénégalaise (UPS, Senegalese Progressive Union). When Senegal achieved independence in 1960, Senghor was elected its first president. He retired from the presidency on 31 December 1980.

Senghor attempted to modernize Senegal, worked against corruption and engaged the international community. He introduced a One-Party State in 1966, but restored multi-party democracy in 1978. Although a socialist, Senghor avoided the Marxist and anti-Western ideology that had become popular in post-colonial Africa, favouring the maintenance of close ties with France and the western world. This is seen by many as a contributing factor to Senegal’s political stability: it remains one of the few African nations never to have had a coup, and always to have had a peaceful transfer of power.

Senghor retired to France, became the first black African member of the French Academy in 1984, and published his memoir, Ce que je crois: négritude, francité, et civilisation de l’universel (‘That Which I Believe: Negritude, Frenchness, and Universal Civilization’) in 1988.

Senghor received several honours in the course of his life. He was made Grand-Croix of the Légion d’honneur, Grand-Croix of the l’Ordre national du Mérite, commander of arts and letters. He also received academic palms and the Grand-Croix of the l’Ordre du lion du Sénégal. His war exploits earned him the medal of Reconnaissance Franco-alliée 1939–1945 and the combattant cross 1939–1945. He was named honorary doctor of thirty-seven universities. Senghor received the Commemorative Medal of the 2500th Anniversary of the founding of the Persian Empire on 14 October 1971. On 13 November 1978, he received the Collar of the Order of Isabella the Catholic of Spain. In 1983 he was awarded the Dr. Leopold Lucas Prize by the University of Tübingen.” The French Language International University in Alexandria was officially open in 1990 and was named after him. The airport of Dakar was renamed Aéroport International Léopold Sédar Senghor in 1996, on his 90th birthday. The Passerelle Solférino in Paris was renamed after him in 2006, on the centenary of his birth.

He died at Verson, France, on 20 December 2001.  He is regarded by many as one of the most important African intellectuals of the 20th century.