In all of boxing history, Muhammad Ali stands alone. In early boasts, he called himself "The Greatest," and by the time his storied career came to an

In all of boxing history, Muhammad Ali stands alone. In early boasts, he called himself “The Greatest,” and by the time his storied career came to an end, most fight fans agreed. Ali had also become the best-known athlete in the world and, very possibly, the best loved as well. 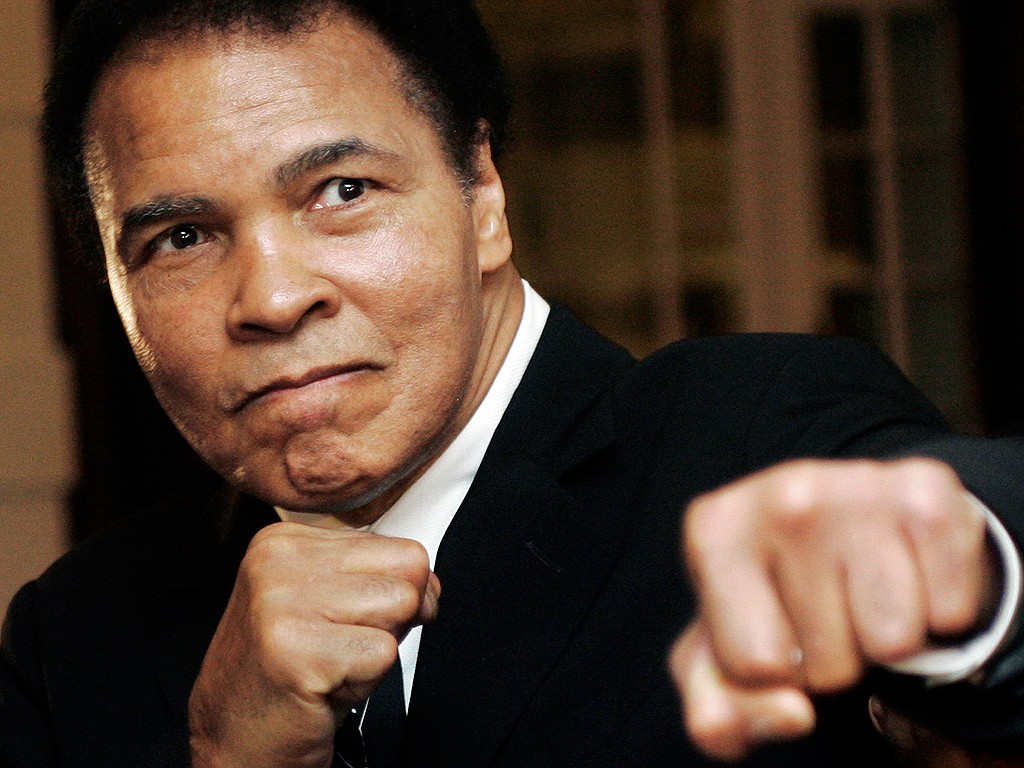 Cassius Clay, who used his birth name until he became a Black Muslim in 1964, grew up in a quiet
black neighbourhood of Louisville, Kentucky. He was a popular student in high school, where his
stunning self-confidence made him noteworthy even then. He had been focussed on boxing since
he was twelve and trained with the single-mindedness of a future champion. He started boxing at
the amateur level in his hometown and captured the AAU and Golden Gloves titles in 1959 and 1960

He competed in the 1960 Olympics in Rome, where Ali won a gold medal in the light heavyweight division.
Ali first boxed professionally in 1960, at the age of eighteen, with a win over a boxer named Tunney Hunsaker.
In subsequent early bouts, it was quickly apparent that Ali possessed unbelievable hand and foot speed for
someone his size. As he developed, he displayed a stinging jab and a strong right hand. Ali liked to hold his
hands low and evade punches to the head by simply bobbing out of harm’s way. The brash young fighter’s knack
for self-promotion nearly rivalled his ring skills. He mugged for the cameras, talked in rhymes, and boasted
that he was not only the greatest, but also the prettiest of all time. He began to predict, with unnerving
accuracy, the round in which he would stop opponents (“They all fall/in the round I call”). In a time when
interest in boxing had waned, Ali dramatically revitalised the sport. He was a one-man show, full of swagger and
contempt, and the press and public embraced him.

Ali proved over and over, with the great talent and boxing intelligence, that he was much more than an entertaining
huckster. In 1961, Ali knocked out Alex Miteff, who had been considered a top contender the previous year. In 1962 and
1963, he defeated such daunting adversaries as George Logan, Billy Daniels, Archie Moore, Doug Jones and Henry Cooper.
Having emerged as the top heavyweight contender, Ali faced the formidable Sonny Liston for the world championship in 1964.
Many observers gave Ali little chance against big, bad Liston. But Ali dominated the fight despite being nearly blinded for
two rounds by a foreign substance used by Liston’s corner. (Perhaps liniment or a coagulant applied to a cut and then
transferred to Liston’s gloves). Muhammad Ali won the Heavyweight Title when Liston refused to answer the bell for the
seventh round, claiming an injured shoulder. After the victory, Ali announced that he had become a member of the
Nation of Islam, the Black Muslim religion, and had changed his name. Ali’s conversion upset some fans. The jokester
had gotten serious about race and politics. It cost him some popularity and probably, though never acknowledged, influenced his future as a titleholder.

When Ali agreed to give Liston a return match, the WBA took the title away ostensibly because the rematch contract was a violation of WBA rules. Ali continued to be outspoken, particularly in statements against the Vietnam War. In his second fight with Liston, Ali triumphed in one round, apparently using his famed “anchor punch.” As with the first Liston fight, this rematch was shrouded in controversy. Some thought that Liston took a dive. After flooring Liston, Ali did not immediately move to a neutral corner. Liston eventually rose from the canvas and the fight resumed. It was only when Nat Fleischer, editor of The Ring, shouted from the ring-side that Liston had been down for at least a count of ten, that referee Jersey Joe Walcott stopped the fight.

Ali’s refusal, on religious grounds, to accept induction into the armed forces caused him to be stripped of his undisputed world title in 1967. Furthermore, Ali faced imprisonment for his action and was barred from boxing while his case was litigated. He called himself “The People’s Champion” continued to be recognised as the world heavyweight titleholder in Great Britain and Japan. Ultimately, in June 1971, the U.S. Supreme Court ruled in Ali’s favour, after he returned to the ring in an October 1970 conquest over Jerry Quarry. In his last fights before his banishment, Ali had combined stylish footwork with great punching power. Most experts concede that upon his return, the older, slightly heavier fighter was not quite the equal of the 1967 Ali.

Ali met the new champion, Joe Frazier, in the “Fight of the Century” in Madison Square Garden in 1971. In an extremely hard-fought battle, Frazier won the decision, handing Ali his first defeat. In one of the greatest series in ring history,
the two met twice more in battles of strength, skill and courage, with Ali emerging as the victor both times. Ali scored a technical knockout over Frazier in their final bout, called the “Thrilla in Manila” and considered by many to one of the greatest fights of all time.

Ali reclaimed the heavyweight championship in 1974 when he knocked out the previously unbeaten George Foreman. Dubbed the “Rumble in the Jungle,” the match was held in Kinshasa, Zaire. Ali used his “rope-a-dope” strategy in which he leaned against the ropes and allowed Foreman to punch himself out. After Foreman tired, Ali knocked him out. Ali lost his title to the unproven Leon Spinks in 1978, but reclaimed it in the rematch later that same year. He then announced his retirement only to make ill-fated comeback attempts against Larry Holmes and Trevor Berbick.

Muhammad has been blessed to meet with important dignitaries, including with President Clinton, Queen Elizabeth II, Nelson Mandela, and Pope John Paul II.
His travels are his main source of income–charging as much as $200,000 for appearances. He usually travels 275 days out of the year. Although he enjoyed his missionary work and public appearances, Ali’s greatest pleasure is when he is at home in Berrien Springs, Michigan with his family, wife Yolanda and his adopted son Asaad Amin.

In Berrien Springs, he lives a modest life in a house at the end of the road on an old farm. He has a pool and a pond and a security gate with an intercom. According to Kim Forburger, Ali’s assistant, “He’s the only man I know where the kids come to the gate and say ‘Can Muhammad come out and play?’ When asked if he has any regrets, Ali responds, “My children, I never got to raise them because I was always boxing and because of divorce,” he said.
When asked whether he is sorry he ever got into the ring, he responded, “If I wasn’t a boxer, I wouldn’t be famous. If I wasn’t famous, I wouldn’t be able to do what I’m doing now.

Plagued by ill health in retirement, Ali remains a respected public figure and one of the most recognised face in the world!
Mohammed Ali Passed on June 3, 2016 aged 74years.  Ali’s daughter Hana Ali said her father was a “humble mountain.”

He who is not courageous enough to take risks will accomplish nothing in life.

I hated every minute of training, but I said, ‘Don’t quit. Suffer now and live the rest of your life as a champion.’