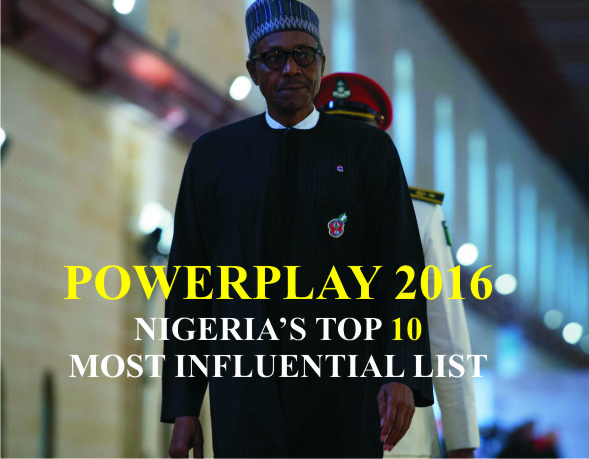 GENESIS INTERNATIONAL MAGAZINE EXCLUSIVE: NIGERIA'S TOP 10 MOST INFLUENTIAL PEOPLE Coming to terms with new developments in Nigeria is such an ardu

Coming to terms with new developments in Nigeria is such an arduous task, the dynamics both in politics and the economy has never been this dynamic. Particularly with the change in government and the falling price of crude oil in the international market, the need for new leaders to champion the course of redirecting Nigeria’s economy is more pressing. If you are a regular reader of our magazine, you will note that a few names have dropped from the list because of the change of guard in Aso rock and new names have sprung into the list. We tried to make the equation more dynamic but out team of matheticians couldn’t come up with a better formula than we used in 2015, whilst we promise not to relent in the research for a new formula, we still had to work something out. With an equation as unique as the Einstein’s law of relativity, this equation is one that should get you thinking, we arrived at this list of those who were most prominent in the Powerplay for the year 2015 and should be closely watched this new year 2016

C – Control over issues and people
B – Bankability (the money factor)
I – Influence in various fields of the economic and social sectors of the nation (when you sneeze, the whole nation listens and how much your opinion can influence the populace)
H – Heat and Controversiality, it just gets everyone talking about you.

Everyone in this list possesses at least traces of the above factors, some have modest levels of C but less of H. others have limited B but oodles of I. nobody has all four elements in equal measure, if they did, the whole country would blow up. But enough of any one of them is all it takes to rise to the top.

1. President Mohammadu Buhari
On the fourth time of asking, PMB rode on the back of the desire of Nigerians for change to become the first civilian opposition candidate to win the presidential elections. Since taking over, he has re-energize the war on corruption, repositioned the armed forces to battle the Boko Haram menace. Whislt many antagonist call him Mr-Go-Slow, one thing even his worst critics cannot take away from him is his determined stance to take Nigeria forward and rid the nation of the cankerworm called corruption. The various challenges from all quarters notwithstanding, he cuts across as someone who knows his right from left and would stick to his guns once he’s convinced an attribute that he has successfully passed to his lieutenants in government.

2. Olusegun Obasanjo
Like the cat with nine lives, OBJ seems to have found the formula to steer clear of the negative publicity that trailed the former ruling party and has gradually started building a statesman reputation that allows him comment on various national issues without being partisan.

3. Aliko Dangote
Little needs be written about the Kano born Billionaire. He is the richest African and the biggest private sector employer of labour in Nigeria, what more can be written of Mr Money! You bet he’s going to remain up there for a long time. Dangote is a friend with the powers that be in government, this he claims, is his insurance against fluctuating government regimes and policies.

4. Bola Ahmed Tinubu
BAT was the pointsman in opposition? Fast forward 2016, he is the leader of Nigeria’s ruling party and a godfather to many political and business heavyweights.

5. Pastor Enoch Adeboye
The General Overseer of the Redeemed church of God has proven that there’s lot a country can benefit from the pulpit just like Uncle Jack’s ‘In God we Trust’. Rich, you bet, but his cool, gentle and godly mien is the most powerful point in his favour and when he speaks, even angels listen.

6. Mike Adenuga
The ijebu chief remains the gold miner in Nigeria, whatever he touches turn to gold. Glowing atop Nigeria’s biggest indigenous telecommunication network and still commands immense respect and patronage within and outside the shores of this country.

7. Babatunde Raji Fashola
BRF, the darling of Lagosians has been saddled with the responsibility of three powerful ministries that would determine the scorecard of the PMB administration. Observers are waiting to see the magic wand that would transform the power sector that has proven to be the Achilles heels of previous administrations

8. Bukola Saraki
Rich, Young, Versatile and Controversial. This last quality contributed to his making the list. Against all odds, Saraki emerged the President of the Senate and since taking office, he has been embroiled in one controversy or the other but it beats one how he still continues to command the respect and support of the formerly very volatile House of Senate. He has also taken the mantle to constitute the eagerly awaited constitution review committee which is another pandora’s box.

9. Kemi Adeosun
Though described by critics as a greenhorn in the finance industry, Kemi’s disposition is of one that is ready to transform the economy of Nigeria. At a time when the revenue of the country is at its lowest, there is a need for a fresh injection of ideas and that is one plus in her kitty, she’s not tainted and can come to the drawing board with fresh ideas which the Finance ministry could well use.

10. Ibrahim Magu
The new helmsman at the Economic and Financial Crimes Commission can aptly be described as the face of the president’s fight against corruption. And no better way to put it than his welcome address or resumption of office, he said, “I want to state our resolve not to falter on the well-established tradition of patriotism, dedication, courage and fearlessness, and we will take this responsibility with utmost seriousness that it deserves.” The fear of magu could well be the beginning of wisdom! Looters Beware!