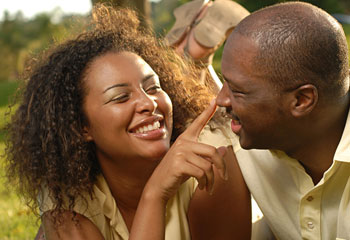 Relationships: The Simple Question That Helped My Marriage

The Simple Question That Helped My Marriage "Don't go to bed angry!’ This was the advice Remi and I heard the most from married couples during our

The Simple Question That Helped My Marriage

“Don’t go to bed angry!’ This was the advice Remi and I heard the most from married couples during our engagement.”Make time for each other,” was another oft-cited piece of wisdom. “Have lots of crazy sex every single night,” said no one. No one. Not One! We received lots of advice. Some solicited, some not. But the best advice I think I received was, “Your partner will never be able to read your mind and when you stop to think about it, the implications are monumental.

As with many relationships, inconsequential fights often break out between Remi and I over the simplest things – washing dishes, hogging the remote, getting too drunk at holiday parties. It seems counter-intuitive, but I think the reason these fights happen is because, for the most part, Remi and I jive so well together. After all, he’s my life partner. And life partners know things…They know when you are ready to leave a party by the way you sigh after one too many jokes but, inevitably, there comes a moment when the machinations of our (let’s face it) genius brain are entirely lost on our partner and, despite our best intentions, we end up flummoxed and at a loss. We’re offended that we even have to explain ourselves, and it seems almost UNFAIR of them to make us do the work of putting in to words whatever we are thinking.

The times when Remi and I were not exactly on the same wave length, I began to just say nothing at all as a way of not having to go through the arduous task of actually articulating my thoughts and it began to separate us in the subtlest of ways. Like most working couples, Remi and I generally don’t spend our week days together. I’m usually off being a businesswoman and he’s generally off in his office, a writer and editor of an international magazine. Throughout the day, we naturally run into a lot of experiences that we try to remember to share with each other, but ultimately forget. But just because we forget about them doesn’t mean they aren’t constantly affecting us. In other words, two people have two entirely different views on life through the mere happenstance that they aren’t together every single moment of every single day.

When Remie and I would get home at the end of the day, there was generally a disconnect, and the results of our separation were a clear divide between us. I would close off – it was just too hard trying to explain myself, and we suddenly began to not know things about each other:

Me: How was your day?
Remi: (watching TV) Fine.
Me: What do you want to do about dinner?
Remi: (Checking email) Whatevs.
Me: Where are you right now? …And that was the million dollar question.

Where are you right now? I would think it was a question that needed some deep, probing answer; but often, Remi just simply wanted to know what I was thinking at that very moment. It could have been as basic as “I want ice cream” or whatever?” Any number of simple answers would do. The shocking thing was, there was never any pressure to recount my entire day or assess the deep wells of my emotion.
This simple question opened the door to communication for us. Often, I’d be reluctant to share the information, because a lot of odd thoughts pass through my mind and revealing them felt pointless but it eventually became fun. I don’t generally share enough to be overwhelming but after she started asking me that question (and I started asking her the same in return), we noticed that we had fewer arguments over, say, who doesn’t eat what, or who leaves their bra on the dining room table etc? We continued to have minor disagreements, sure, but we understood more where the other person was coming from. We started to see how each other’s brain worked. Everyone’s heard the advice “communication is key,” but there never seemed to be an instruction manual providing us with just HOW to communicate. Perhaps it’s just a simple question that requires a simple answer: Where are you right now?