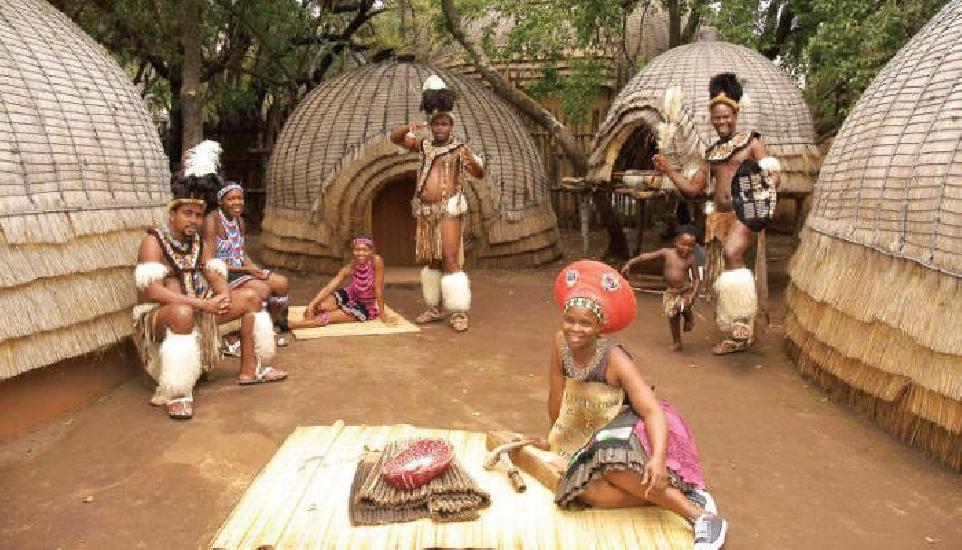 With an estimated 10-11 million people living mainly in the KwaZulu-Natal province – and additional small numbers in Zimbabwe, Zambia and Mozambique-, the Zulu are the largest South African ethnic group.

Their language, isiZulu, is part of the Nguni subgroup of the Bantu language. The Zulu belong to the Nguni linguistic group whose origin is lost in an oral tradition that precedes recorded history. The Nguni people can be divided into southern tribes of the Eastern cape (Xhosa, Pondo, Thembu) and northern tribes (Zulu, Swazi, Ndebele). 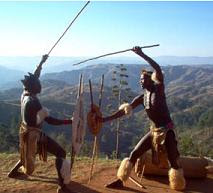 The Nguni people were traditionally cattle herders believed to have originated somewhere in the Congo basin in Central Africa – a mystical land called Embo, according to tribal storytellers. They seem to have followed the Zambesi downstram on an inland migratory route. This brought them into contact with the San (or Bushmen) hunters from whom they enriched their language with their, today famous, “click” sounds. Moving southwards the Nguni reached the most northerly bend of the Limpopo River, which forms the border between Zimbabwe and South Africa.

During the 16th and 17th centuries the Nguni moved south, and a small group settled in the fertile valleys of Zululand. One of the settlers was Malandela, whose wife Nozinja bore him two sons, the second of which was named Zulu (Heaven). He was, by all accounts, a spirited and determined young man, and his marriage signalled the beginning of a new clan, with all their descendants proudly perpetuating the name of Zulu. The Zulus settled into the heart of KwaZulu-Natal around 1709. At that time, the area was occupied by many larger Nguni communities and clans. Having arrived in South African region, they came in contact with SAN hunters and this could be responsible for the click sound characteristic of their language today. 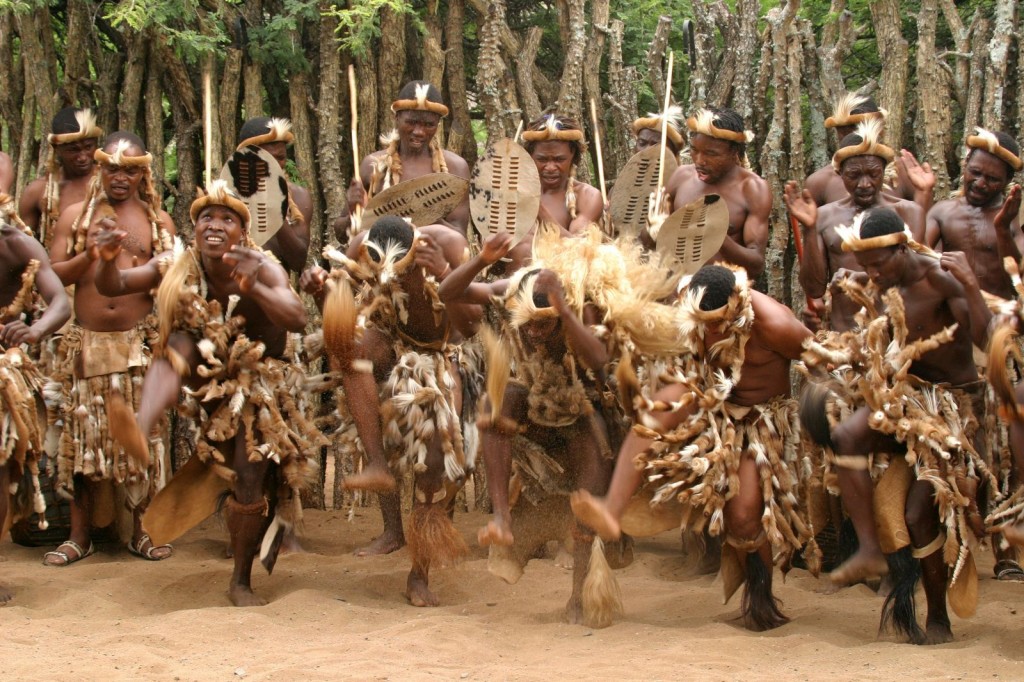 The Zulu, ‘People of heaven’ are a famous warrior nation who with their rawhide shields and broad bladed stabbing spears. Zulu custom dictates that when going on a journey the traveler must spit on a stone and throw it on the ISIVIVANE so as to enable the spirits to bring good fortune on the journey. ISIVIVANE is a good luck stones. Before being allowed to enter a Zulu village, Guests must identify themselves by shouting out a traditional  greeting which is called UKU-KHULEKA in Zulu Language – which means ‘the Guests have come with peace not war’. The traditional gateway to Zulu Village is called E’SANGWENI in Zulu Language.  In Zulu culture wealth is measured in beautifully colored Nguni Cattle. Cattle are also used for ILOBOLA which is called Dowry or Bride price in English. The dowry for a commoner is eleven heads of cattle. The Zulus live in beehive hut that is left unthatched and open on the sides to allow the smoke from the cooking fire to escape, and to provide Ventilation. The Ancestral hut is called INDLULU which is decorated with skulls of animals that have been used for sacrificial worship. This is also the grandmothers’ hut and is the most important hut in the homestead. In Zulu Culture left hand must hold the right hand when exchanging hand shake. Women must systematically bend down a bit on the knee and Men must bow their heads a bit showing respects for elders. As a sign of their war trade, every Zulu village is always guarded by The Zulu warriors with one standing at the tower for monitoring  the intruder and as well prevent threat to security incase of any emergency attack.

Ndebele heritage can be traced from Zulu Heritage through the history of the first identififiable chief named Mafana. Mafana’s successor, Mhlanga, had a son named Musi who, in the early 1600’s decided to move away from his cousins – later to become the Zulu nation and to settle in the hills of Gauteng near where the South Africa Capital, Pretoria is situated. After the death of Chief Musi, his two Sons had misunderstanding over the Chieftainship and the tribe divided into two known as Manala and the Ndzundza. The Manala remained in the north while the Ndzundza known as the Southern Ndebele, travelled to the east and the South. Both groups remain distinctly Ndebele.These people are as well known with their artistic talents, color mixtures, drawings and paintings.

The Basotho people are from the mountain Kingdom of Lesotho, with their conical hats, colorful blankets and skillful horsemanship, they have a wonderful heritage. Their founder, King MOSHOESHOE, during the great wars, gave refuge to scatterings in his mountain fortress; in so doing he created the Basotho nation. Ever fearful of attack he was grateful every sunrise, which he would greet with the word, KE BONA LESEDI… I thank the light.

Xhosa tribe is a tribe from where the African Hero Nelson Mandela emerged to lead all the people of South Africa to freedom. They are from the Ngunis now situated on the beautiful hills and coastline of the Eastern Cape. They are well known with their painted faces, blankets, pipes and chest beating dances. The land of Xhosa is windy so they build their fire places in the shape of a cross using 3 legged cast iron pots, this way they cook their meals in a corner, away from the wind. Have you heard about Africa polishing the floors with cow dung? Cow dung is use to polish floor in Xhosa Village and it’s done twice in a week. And it drives away all the insects and flies away from the huts and compound.