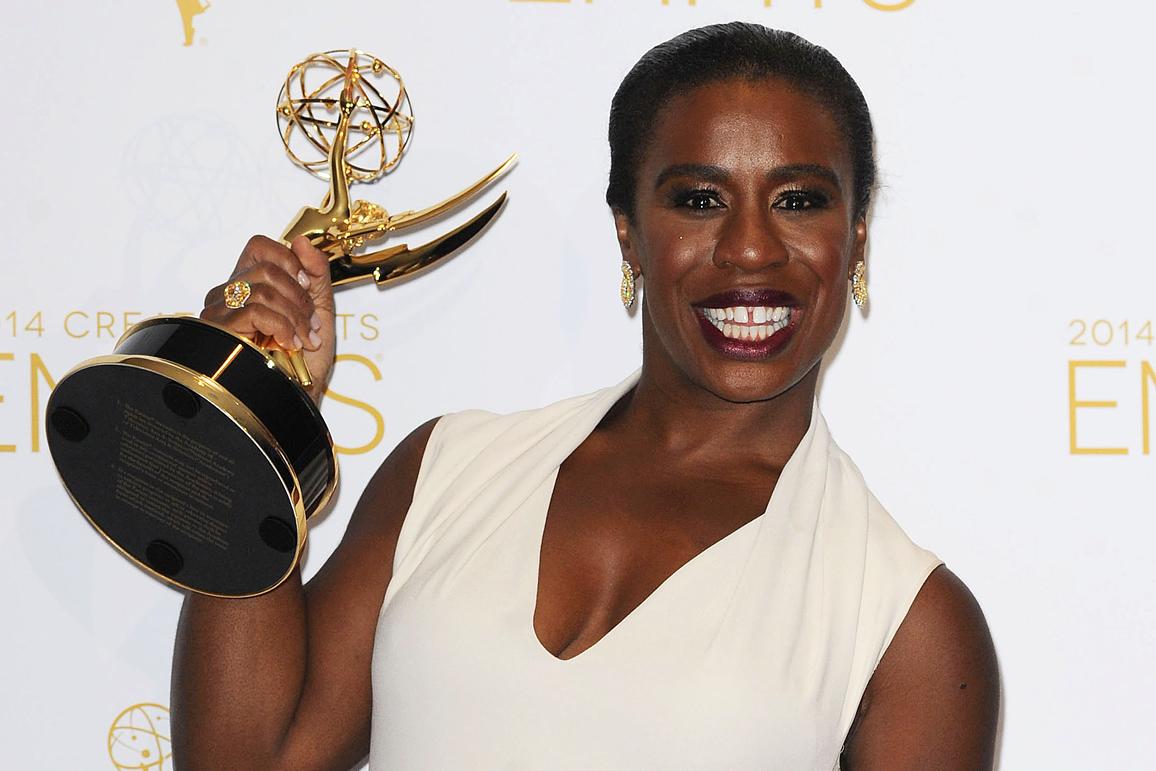 Golden Gurl: Uzo Aduba Wins Emmy Who says stardom is a preserve of some few? Not where golden gurl is concerned! Uzo Aduba's eyes only glistened wi

Who says stardom is a preserve of some few? Not where golden gurl is concerned! Uzo Aduba‘s eyes only glistened with tears of joy and gratitude at the 2014 Emmys Award  when she took home her first-ever Emmy for her portrayal of quirky inmate Suzanne “Crazy Eyes” Warren on Orange Is the New Black. 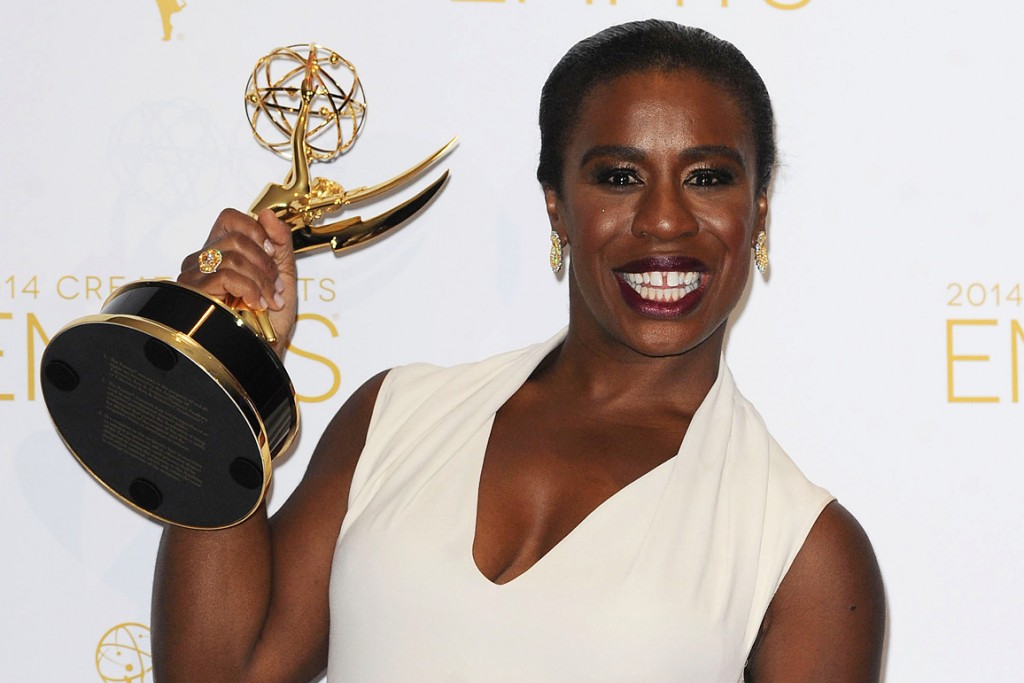 “I feel so full, that’s why the tears come out,” Aduba, 33, told reporters in the press room following her win for outstanding guest actress in a comedy at the 2014 Primetime Creative Arts Emmy Awards at the Nokia Theatre L.A. Live. “I’m stuffed really. I’m beyond full. My cup runneth over right now. I feel absolutely all of those things: I feel full of joy, like a fountain. Mission accomplished.” Who would have imagined that this Nigerian American would just rise to become the golden girl of international repute. Aduba first garnered recognition for her acting in 2003, when her performance in Translations of Xhosa at the Olney Theatre Center for the Arts earned her a Helen Hayes Award nomination for Outstanding Supporting Actress in a Play.  In 2007, she made her Broadway debut, portraying Toby in Coram Boy. From 2011 through 2012, she sang “By My Side” as part of the original revival cast of Godspell at the Circle in the Square Theatre. Her first television appearance was as a nurse on Blue Bloods in 2012. She also played the mother of the title character of Venice at The Public Theater in New York. In 2013 she began portraying Suzanne Warren, also known as “Crazy Eyes”, in the Netflix comedy-drama series Orange Is the New Black. Of her being cast, she said, I auditioned for the show back in late July or early August of 2012. I had been auditioning that summer for more television and film after doing much theater. I’d read a lot of scripts and I remember reading “Orange Is the New Black,” and it was at the head of the pack. I remember thinking, “Wow, that is really good, I would love to be a part of that.” I went in and auditioned for another part, and my representatives called me about a month later and they were like, “Hi, we have some really good news. You remember that audition you went on for ‘Orange Is the New Black’? You didn’t get it.” I go, “So… okay, what’s the good news?” They said they wanted to offer me another part, Crazy Eyes. I was like, “What in my audition would make someone think I’d be right for a part called Crazy Eyes?” But to be honest, when I got the script for it, it felt like the right fit.

In a recent chat with the multi-award winner Aduba revealed to us that the transition from guest to supporting wasn’t hard for her from season one to two but seeing what “Crazy Eyes” would be going through was: “That was a hard exercise as an actor. This was an exercise in standing by a choice that I would never choose. But I have to take my own judgments and my own thoughts about the matter and shelve them and I have to put them over here and I have to exist from a place of hope.” 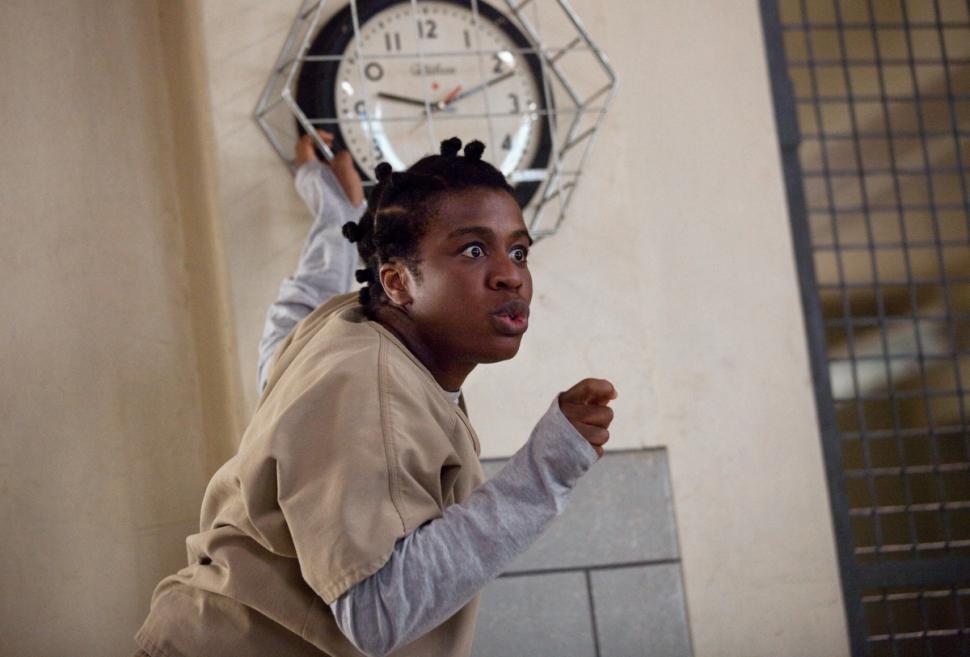 With the Globes and Screen Actors Guild nominations on the way, Aduba told us that not even her recent Emmy win back in August has made her an “awards pro” yet: “It’s still a surprise. Like is this really happening? I think they said my name. Maybe there’s another Uzo? I just feel humbled and grateful by the whole thing.”

Uzo Aduba is looking to add a Golden Globe Award to her mantel next to her Best Comedy Guest Actress Emmy for her breakout role as Suzanne “Crazy Eyes” Warren on “Orange is the New Black.” She is currently filming Pearly Gates, where she plays “Corrie” alongside Scott Grimes and Bonnie Somerville.