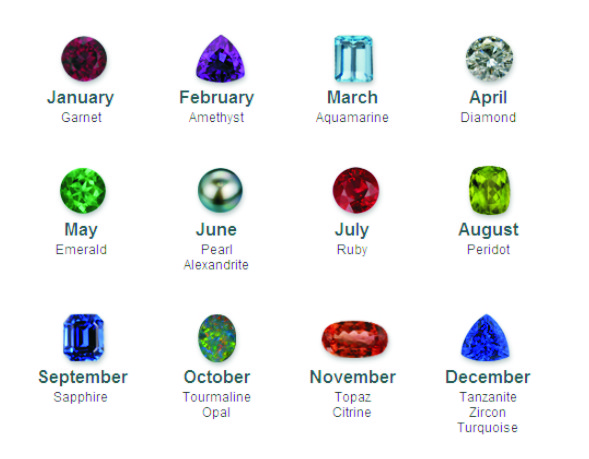 Lifestyle: Birthdays, Gemstones and Their Meanings

12 Birthday Gemstones and Their Meanings Traditionally, a birthstone is associated with each month of the year. For example, the birthstone for Jan

Entertainment: MTV Africa Music Awards 2015
Streetwise: Ajegunle, Live in the Jungle City
5 Simple Exercises to Get a Flat Tummy at Home with Ease

12 Birthday Gemstones and Their Meanings

Traditionally, a birthstone is associated with each month of the year. For example, the birthstone for January is a garnet, while lucky babies born in April get a diamond as their birthstone.
The origin of birthstones is believed to date back to the breastplate of Aaron which contained twelve gemstones representing the twelve tribes of Israel. The current list dates back to 1912 with only one addition since then – the tanzanite was added to December.
There are numerous legends and myths about healing-gemstones and their therapeutic influence. According to these legends, wearing a gemstone during its assigned month heightened its healing powers. For the full effect, individuals needed to own all twelve and alternate them monthly.
The properties of each gemstone have been noticed since ancient time and since then they have been analyzed and developed. Every birthday gemstone has something special about it and will open its powers to its wearer only. Do you believe that your birthday gemstone is the best talisman for you? Which one is yours?

1. Garnet – January
People who were born in January have garnet as their birthday gemstone. As a rule, these stones come in deep red color or are rich purple, however, you may happen to see garnets of other colors. It’s considered to have numerous positive qualities, including the curative power. It has a healing effect for heart and lungs. In addition to that garnet is a talisman that ensures protection and success. This gemstone is also associated with purity, faithfulness and truthfulness.

2. Amethyst – February
This beautiful and royal stone is the birthday gemstone for people born in February. The usual color of amethyst ranges from light purple to dark violet. The most outstanding property of this gemstone is healing. It helps with pains and headaches, insomnia and arthritis. People having amethyst as their talisman are usually associated with peace, stability and balance. Such people are known for their inner strength, calm disposition and being honest.

3. Aquamarine – March
The next gemstone, Aquamarine, is for the next month, March. The name ‘Aquamarine’ is derived from Latin and means ‘seawater’. This stone is very beautiful and is loved for its calming sky-blue color, which can range from light blue to dark blue. This talisman protects its owner from stress and throat illnesses. It is known to have a soothing effect, so it is good to use for meditation. The stone brings peace to its owner and helps reach truth and wisdom.

4. Diamond – April
Diamonds are surely the best friends for every girl but for April beauties they become special talismans. We love them for that special sparkling it has and for that special feeling they give us when putting them on. Diamond’s healing properties become apparent by its help with brain problems. This gemstone strengthens its owner’s clarity of mind and power of soul. It helps to keep balance and reinforce the inner strength. A symbol of eternal love, wearing diamonds is believed to bring other benefits such as balance, clarity and abundance.

5. Emerald – May
People born in May are lucky to have emerald as their birthday gemstone. A true emerald is of dark green hues and totally transparent. The green coloring is very symbolic and for nature, renewal, fertility. Long time ago people used to believe that emerald would help to heal any illness connected with eyes, heart, spine. This gemstone is also considered to be a symbol of true love that binds the couple, hope, faithfulness. Some people find the emerald to be a tranquilizer for a troubled mind. It is also said to bring the wearer reason and wisdom.

6. Pearl – June
June’s birthday gemstone is a gentle and modest pearl. True pearls are very valuable as it takes one 5-8 years to form. We all know pearls to be white color but they also may be of other colors, for example, black pearls are now very popular in modern jewelry-making. These gemstones are believed to be healing for stomach and heart. As for their positive influence on the wearer it must be mentioned that pearls enhance personal integrity and promote loyalty, truth, faith and purity. Traditionally, these gemstones are associated with feminine energy, beauty and purity.

7. Ruby – July
People born in July have Ruby as their birthday gemstone. This gemstone is of rich and deep red color so that it is usually associated with fire, power and energy. Wearing rubies guarantees protection from infections and wicked thoughts. This gemstone stands for strength and confidence, good luck and success, as well as vitality.

8. Peridot – August
The birthstone for August is a peridot. It has yellowish green color and probably because of that is believed to cure problems with digestive system, kidneys and liver. It has positive influence on psychological wellbeing as well. It helps to fight depression and to counter negative emotions. This gemstone is a symbol of dignity, truth and faithfulness, as well as of love and loyalty,

9. Sapphire – September
September’s gemstone is a breathtaking rich and deep blue Sapphire. As a healing means, it influences the cardio-vascular system, fights inflammations, protects physical and mental wellbeing. This royal gemstone is believed to bring protection and fortune, it is a symbol of strength and spiritual power, as well as of kindness, wisdom, learning and mental strength. In addition to that, an interesting fact is that Sapphire protects its wearer from evil spirits and baleful looks, so it is a very powerful talisman.

10. Opal – October
Opal is a birthday gemstone for people born in October. It may be of white or black color but with the iridescent brinks. This gemstone is typically associated with purity, innocence, hope and happiness. The main describing word for it may be inspiration, as it stimulates imagination, creativity and originality, and intensifies emotions. Opals bring confidence, will to live, strong desire and ability to love.

11. Topaz – November
Topaz is November’s birthstone, which comes in various colors but golden yellow is considered to be the most valuable. Its positive effect on health consists in healing problems with digestive system, it stimulates metabolism and strengthens nerves. If you have Topaz as your talisman, it will bring you joy, true love and good fortune. This is a symbol of self-control and honesty, truth and forgiveness.

12. Turquoise – December
The gemstone for people born in December is Turquoise. This blue-green gem is absolutely great, and it is one of the oldest protective amulets, which is thought to bring wealth, good fortune and happiness. The most fascinating feature of this stone, I think, is the ability to absorb wearer’s negative energy and transform it to help find wisdom, peace and to find connection with the universe. Apart from that, many cultures believe that Turquoise takes on all the characteristics of the wearer. This azure heaven gift from the nature stands for honesty, creativity, strength and renewal, truthfulness and success.