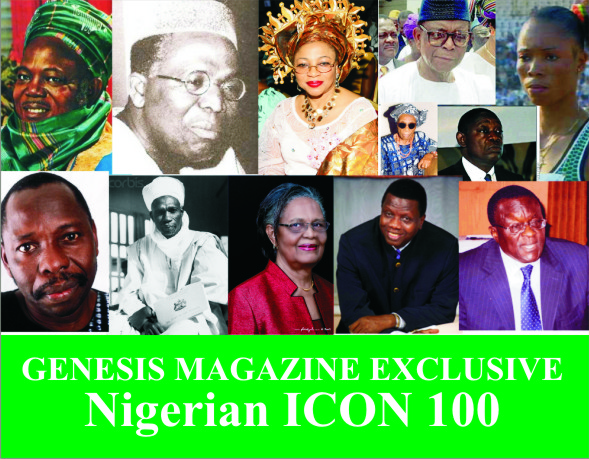 Genesis Exclusive: NIGERIAN ICON 100 BY  Yomi Agbabiaka On January 1st 1914, Nigeria’s journey to nationhood commenced when the Northern and South

On January 1st 1914, Nigeria’s journey to nationhood commenced when the Northern and Southern Protectorates were amalgamated into one country by the colonial authorities.

As Nigeria celebrates 100 years – we are celebrating a journey underlined by a determination to excel and remain united as a strong indivisible entity. Nigeria is a story of dreams, aspirations, laughter and tears. So many hopes shattered yet keeping the smile on; immense mineral resources yet more than 80percent of the 150million populace still lives under $1 per day. Sitting down to analyse the one hundred years of the Nigerian nation would really offer little to cheer about but the one thing that has kept Nigeria together has been the people, both the led and the leader. A study once claimed Nigerians are the happiest people on earth and that is the truth, Nigerians are tireless optimist, facing the odds irrespective of their limitations, an adage says when you push a man to the wall he would turn back to confront you but for the average Nigerian, when you push him to the wall, he will shift the wall further, it’s a story of resilience, faith, hope and love. I once told a friend, its only in Nigeria that you see a man give to a beggar even when he doesn’t have enough for himself, and when I say enough, I meant nothing for himself. As we celebrate the centenary, GENESIS MAGAZINE computed the names of Nigerians who in their various fields have been an inspiration to us as Nigerians. This list in inexhaustible and for lack of space it would be impossible to include all those that matters. In compiling this list, we not only looked at the person and their achievements, we also analysed their acceptability across the length and breadth of the country, their impacts how much it cut across and what it contributed to their immediate environment and how many lives were impacted positively. In the political vanguard, we tried to play down the roles of military interventionists as much as possible.

We have also included for special mention the list of Nigeria’s head of government because we cant but recognize each one’s contribution to our dear country. Their actions or lack of one all contributed to making Nigeria what it is today and their scorecards can only be left to posterity.

The list also contains a lot of names that have gone to the great beyond but whose footprints remain etched on the sands of time. When I was young, we were told youths were the future of the nation, unfortunately there are lesser youths climbing the ladder partly because the older generations have refused to retire and also because the youths of today now have a more personalized rather than nationalized dreams and aspiration. Whichever way, it was great going through this exercise and hopefully the ICON 100 will become a yearly feature on the magazine and we can allow Nigerians the opportunity to nominate and vote their icons.

For Full List
Get your copy of GENESIS INTERNATIONAL MAGAZINE Issue 6
Now available on konga.com