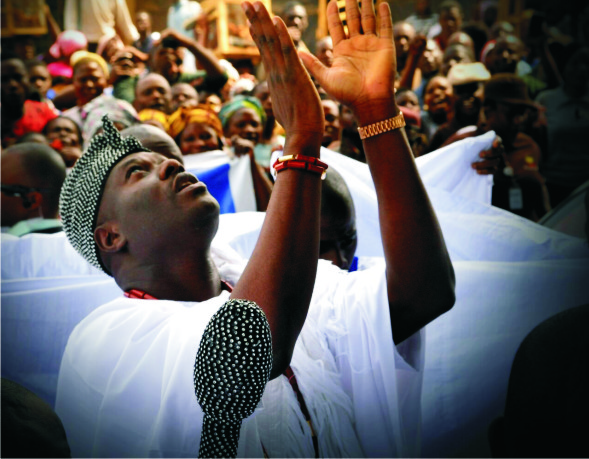 His Imperial Majesty Oba Adeyeye Ogunwusi: Destined To Reign A narration of the history of Nigeria can never be complete without the infusion of th

A narration of the history of Nigeria can never be complete without the infusion of the tribe that is, the Yorubas. With one of the deepest castes known to man, the Yorubas have established themselves as one of Nigeria’s biggest and culturally relevant communities.  Most pundits will agree that the town of Ife serves as the tribe’s headquarters. Ile-ife, a town of tranquility is best referred to as the origin of the Black race in general and the Yorubas in particular. The influence extends as far as the Caribbean, Cuba, Brazil and some other North American countries where the Yoruba day is celebrated annually. The Oranmiyan staff is the symbol of authority and the pride of the Yoruba race and like all great cultural castes go, there is always an equally magnificent ruling system that serves as a balance for the society. This is where the Ooni of Ife comes into play. 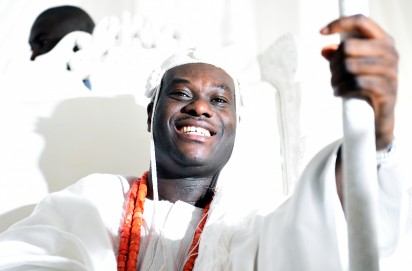 The Ooni of Ife is the paramount traditional ruler of Ile Ife, the ancestral home of the Yoruba people. Since the demise of Oduduwa, a host of top notch personalities have been cradled with the yoke of occupying the hot seat of the Ooni. From the time of Ooni Oduduwa to the ever  impressive Oramiyan Omoluabi (who birthed the Benin Kingdom and fathered the first Alaafin of Oyo), to even the female Ooni Luwoo and recently, Ooni  Okunade Sijuwade, it has to be said that only the best of the best have been given the opportunity to carry the crown of the Ooni. And such is the case of Adeyeye Ogunwusi.

There is an adage that says some are born great while some have greatness thrust upon them. The story of Oba Adeyeye Ogunwusi is that of a man that was born to be great. His greatness had been predicted even before his birth, little wonder his choice as the next Ooni of Ife to succeed the late Oba Okunade Sijuade. Adeyeye’s father said, ‘he grew up with signs of greatness’.

Forty-two years ago in the ancient city of Ile-Ife, a prince was born into the Giesi Ruling House, Ojaja Royal Compound of Agbedegbede in Ile-Ife. He was named Adeyeye Enitan. Many years before the birth of the young prince, it was predicted that a child of prominence that would impact the lives of mankind would be born into the family at exactly 1pm. Indeed, Adeyeye came into this world at exactly 1pm on a Thursday, the 17th of October, 1974. Enitan-ooni With the news of the arrival of a new born prince, he was specifically named Adeyeye by his grandfather Pa. Joseph Olagbaju Adewole Ogunwusi Jnr. The name Adeyeye in English translates to ‘A Crown Befitting for a King’; Pa Ogunwusi on setting his eyes on the new born prince began to call him Adeyeye Ooni from that very day till he passed away. The young prince’s late mother also named him Enitan which in English translates to ‘A child of great story’.

Oba Adeyeye Enitan Ogunwusi had his primary and secondary school education in Ibadan and Ile-ife. He holds a Higher National Diploma in Accountancy from The Polytechnic Ibadan, where he started cutting his teeth in outstanding entrepreneurship, even as a student.  He is a member of several professional bodies including Institute of Chartered Accountants of Nigeria (ICAN), an Associate Accounting Technician and a certified member of the Institute of Directors (IOD) Nigeria. He is also an active member of the Global Real Estate Institute (GRI).

Oba Ogunwusi is an all round businessman and an entrepreneur of repute with business interests in engineering, real estate, procurement and construction both locally and internationally for over twelve years. He has infact been actively involved in the development of over 2500 housing units with various consortia of developers and promoters. He facilitated strong trade relationships in over 200 member countries across the globe using the Association for International Business presence, an organization he set up in Nigeria.  One of the key achievements of this body is the trade facilitation between the United Arab Emirates (Jebel Ali free Trade Zone Development) and the Nigerian government through the Nigerian Investment Promotion Commission. He was a co-organizer for Ondo State Economic Planning and Implementation Committee. He led the Government delegation team to Canada in 2002 for strategic alliances and partnership with Ondo State Government on solid mineral potentials of the state (Bitumen, Dimension Stones, Granite, etc.) which led to the formation of Amalgamated Mining and Exploration Company Limited – wholly owned by Ondo State Government.  He was involved in the facilitation and development of Sparkwest Steel Galvanizing Plant (the only Steel Galvanizing Plantin Nigeria), National Iron Ore Mining Company Limited and Jakura Mines resuscitation projects which has eventually become the major limestone feed stock to Obajana Cement Plant in Kogi State, Nigeria.

Early in 2015, Prince Adeyeye disclosed his plans to take Ile-Ife to greater heights by rebranding the ancient town and replicating the Grand Resort in Ile-Ife, having already acquired a good land mass for the project. He is a grassroots fellow to the core, whose humility is second to none and a lover of youths. As a philanthropist, Prince Adeyeye has sponsored numerous less privileged children and youths in his hometown of Ile-Ife and likewise in Lagos where he lives. Many youths till date are beneficiaries of Prince Adeyeye’s scholarship platform.

His Imperial Majesty, Oba Ogunwusi is best described as a distinct achiever with a revolutionary approach to creativity and innovation resulting in excellence. His vision and creativity saw a remote jungle called ‘Inagbe Island’ in Lagos transformed into a brand new community with the establishment of a world class relaxation and recreational center. The Inagbe Grand Resort and Leisure Centre, Lagos is the first of its kind in the whole of west Africa bounded by the Lagos Lagoon and the Atlantic Ocean.

A bridge builder and peace ambassador, Oba Ogunwusi on ascension of office has taken on the toga of an ‘elderly’ despite his very young age. His first port of call was an historic visit to the Alaafin of Oyo’s palace where he was warmly welcomed by His Imperial Majesty, Oba Lamidi Adeyemi. The visit brought to an end the animosity that has existed between the two kingdoms for over thirty years. Such visits have also been extended to other Yoruba Obas to foster a strong brotherly love among the tribe. Ooni Ogunwusi promised ‘to unite all the Yoruba and avoid supremacy tussle with any monarch it is indeed a new dawn. It is our God that makes a king, and I am grateful to God for preparing me for this throne. I did not become a king by accident, God designed it to be so because as a prince, I had personal dealings with over 20kings and I will explore this to work for the unity of all Yoruba monarchs. Speaking further, He said, ‘immediately I was selected by the kingmakers, I called the Awujale of Ijebuland, Oba Sikiru Adetona and discussed with him the essence of bringing everybody together. I am glad to say that today we are on the same page. I also called Alafin of Oyo, Oba Lamidi Adeyemi. We spoke at length. He came around during my seclusion. I have also met with Oba Akiolu of Lagos apart from many other traditional rulers that I have personal relationships with. So gradually, the Yoruba kingdom is coming together. I want to admit that fingers are not equal, but there must be unity’.

The youthful Ooni also promised to do a lot for the youths and improve on our values. ‘I consider myself to be fortunate because for somebody within my age grade to be closer to many leaders, is a rare privilege. And I have started some serious discussions with some monarchs that we are in the same age bracket to improve on the traditional institution’.

A man who loves to contribute his quota to his society, he has personally installed power transformers for several communities. It is without doubt that the Ooni of Ile –Ife through his vision to impact the lives of everyone around him and his fervent passion for humanity has broken grounds as an investor in people and a preservationist of the cultural heritage of Ile-Ife. He is loved and highly admired by the people of Ile-Ife and importantly, he remains in tune with his roots and tradition. He is married to Adedokun Adebisi Ogunwusi and blessed with a daughter, Adeola Aanuoluwapo Ogunwusi. Long live the King!